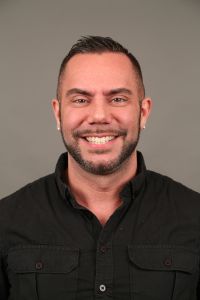 RJ Thompson, Esq. (he/him) is a longtime human rights lawyer, organizer, and educator; as well as a certified personal trainer, go-go dancer and performer in the adult film industry. Prior to joining the Sex Workers Project as Managing Director, RJ worked as the Fair Courts Project Community Educator at Lambda Legal, where he trained judges, attorneys and court staff on gender and sexuality cultural competency and advocated for judicial diversity and judicial independence in Arizona, Texas, Florida and the Federal bench. Previously, RJ served as the Miami High Road Coordinator with the Restaurant Opportunities Centers United (ROC United), fighting for increased wages, health care and paid time off for restaurant workers, as well as Director of the Human Rights Program at the Woodhull Sexual Freedom Alliance where he advocated for the human rights of sex workers during the first United Nations (UN) Universal Periodic Review of the U.S. RJ was also the National Campaign & Advocacy Manager at the Lesbian, Gay, Bisexual & Transgender (LGBT) Community Center in New York City, where he coordinated Causes in Common, a national cross-movement initiative linking the reproductive justice and LGBT movements. He was Membership Program Coordinator at the US Human Rights Network (USHRN) Coordinating Center, where he organized Southern NGOs to meet with the UN Special Rapporteur on the Human Rights of Migrants. In addition to his staff role with USHRN, he also co-founded the Sexual Rights and Gender Justice Working Group of the USHRN as a volunteer leader and later served on the USHRN Board of Directors.

RJ received his J.D. from the City University of New York (CUNY) School of Law and his B.A. in Africana Studies and Political Science from the University of South Florida in Tampa. He has also worked with the National Gay and Lesbian Task Force, Equality Florida, the Sylvia Rivera Law Project, CRUNCH fitness, and Amnesty International USA. RJ is a queer identified mixed blood Cherokee with deep Southern roots. He is an active member and leader in the Soka Gakkai International USA (SGI-USA) Nichiren Buddhist organization for peace, culture and education. He is also a vegetarian and a bodybuilder.